efourmies
Admin
posted on 9 months ago — updated on 8 months ago
411
views
Travel Bookmarks
The Darvaza gas crater (Turkmen: Garagum ýalkymy),[1][2][3] also known as the Door to Hell or Gates of Hell, is a natural gas field collapsed into a cavern located in Derweze, Turkmenistan. 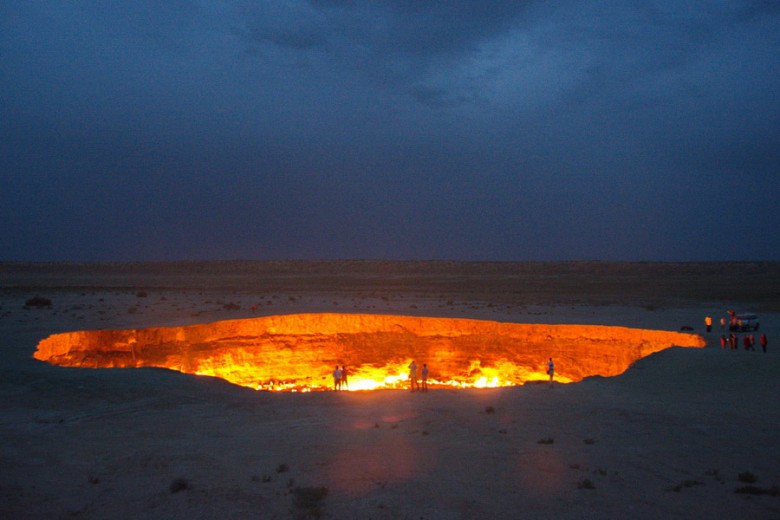 The Darvaza gas crater (Turkmen: Garagum ýalkymy),[1][2][3] also known as the Door to Hell or Gates of Hell, is a natural gas field collapsed into a cavern located in Derweze, Turkmenistan.[4] Geologists intentionally set it on fire to prevent the spread of methane gas and it is thought to have been burning continuously since 1971. The gas crater has a total area of 5,350 m2. Its diameter is 69 m (226 ft), and its depth is 30 m (98 ft).[5]

The Turkmen government hopes that the crater will become a popular tourist attraction.[6] The surrounding area is also popular for wild desert camping.

The gas crater is located near the village of Derweze, also known as Darvaza. It is in the middle of the Karakum Desert, about 260 kilometres (160 mi) north of Ashgabat, the capital of Turkmenistan. The gas reserve found here is one of the largest in the world. The name "Door to Hell" was given to the field by the locals, referring to the fire, boiling mud, and orange flames in the large crater, which has a diameter of 70 metres (230 ft).[7] The hot spots range over an area with a width of 60 metres (200 ft) and to a depth of about 20 metres (66 ft).[8]

According to Turkmen geologist Anatoly Bushmakin, the site was identified by Soviet engineers in 1971.[6] It was originally thought to be a substantial oil field site.[9] The engineers set up a drilling rig and operations to assess the quantity of oil available at the site. Soon after the preliminary survey found a natural gas pocket, the ground beneath the drilling rig and camp collapsed into a wide crater and was buried.[6]

Expecting dangerous releases of poisonous gases from the cavern into nearby towns, the engineers considered it advisable to burn the gas off. It was estimated that the gas would burn out within a few weeks, but it has instead continued to burn for more than four decades.[6]

The early years of the crater's history are uncertain:[10] local geologists say the collapse into a crater happened in the 1960s, and the gases were not set on fire until the 1980s. There are, however, no records available of either the Soviet or Turkmen version of events.[5][3]

In April 2010, the President of Turkmenistan, Gurbanguly Berdimuhamedow, visited the site and ordered that the hole should be closed. In 2013, he declared the part of the Karakum Desert with the crater a nature reserve.[6] In 2019, he appeared on state television doing doughnuts around the crater to disprove rumours of his death.[11]

The crater was featured in an episode of the National Geographic Channel series Die Trying. In the July 16, 2014 episode "Crater of Fire", explorer George Kourounis became the first person to set foot at the bottom, gathering samples of extremophile microorganisms.[12] An edited photograph of the crater was also released as publicity for the then-upcoming 2014 Godzilla film, with the image depicting MONARCH agents and vehicles investigating the site.

On President Berdimuhamedow's April 2010 visit, he recommended that measures be taken to limit the crater's influence on the development of other natural gas fields in the area.[8] At that time, Turkmenistan announced plans to increase its production of natural gas, intending to increase its export of gas to many countries such as Pakistan, China, India, Iran, Russia and Western Europe, from its then yearly production level to a new production level of 225 billion cubic metres (7.9 trillion cubic feet) by 2030.[8]