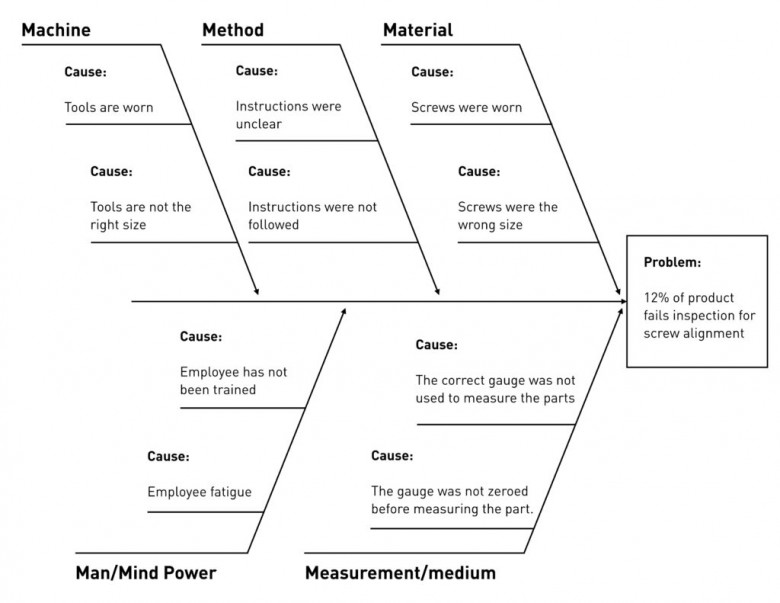 Common uses of the Ishikawa diagram are product design and quality defect prevention to identify potential factors causing an overall effect. Each cause or reason for imperfection is a source of variation. Causes are usually grouped into major categories to identify and classify these sources of variation.

The defect is shown as the fish's head, facing to the right, with the causes extending to the left as fishbones; the ribs branch off the backbone for major causes, with sub-branches for root-causes, to as many levels as required.[2]

Ishikawa diagrams were popularized in the 1960s by Kaoru Ishikawa,[3] who pioneered quality management processes in the Kawasaki shipyards, and in the process became one of the founding fathers of modern management.

The basic concept was first used in the 1920s, and is considered one of the seven basic tools of quality control.[4] It is known as a fishbone diagram because of its shape, similar to the side view of a fish skeleton.

Mazda Motors famously used an Ishikawa diagram in the development of the Miata (MX5) sports car.[5]

The causes emerge by analysis, often through brainstorming sessions, and are grouped into categories on the main branches off the fishbone. To help structure the approach, the categories are often selected from one of the common models shown below, but may emerge as something unique to the application in a specific case.

Each potential cause is traced back to find the root cause, often using the 5 Whys technique.

Originating with lean manufacturing and the Toyota Production System, the 5 Ms is one of the most common frameworks for root-cause analysis:[7]

These have been expanded by some to include an additional three, and are referred to as the 8 Ms:[8]

This common model for identifying crucial attributes for planning in product marketing is often also used in root-cause analysis as categories for the Ishikawa diagram:[8]

The 8 Ps are primarily used in product marketing.

An alternative used for service industries, uses four categories of possible cause:[9]

A recurring theme in a lean or Six Sigma transformation is removing the clutter to reveal waste or opportunities for improvement. A fishbone diagram aims to break down and organise the Causes of an issue to reveal what elements have the greatest impact. Grouping the “causes” means you can think about the different elements of the problem as separate from the overall process. One or two of these “causes” will have a greater effect than the others and will guide you to the root of the problem. This structure also allows you to tackle smaller chunks which have a large impact on the problem. Looking at elements of the problem and not the whole process will likely make finding your solution less daunting and problem solving more manageable.

After you have determined your root cause, prioritise or screen the causes to determine which are having the largest effect. Once identified focus on these. An easy Cause screening method involves looking at each one and asking two questions:

How likely is this cause to be the major source of the issue or variation?

How easy would it be to fix or control?

Put the answers of the two questions together. Work on the Causes that have a result of VV, VS, and SV.[10]